This Ex-MOD Gun Tractor is being repaired by a friend of Michael and myself. Far from being restored, this beast is almost being re-manufactured into an every day driver/overlander. The Land Rover 101 was developed in the late sixties, powered by a petrol Rover V8, it was able to tow artillery, its ammunition and carry it’s crew. 101’s very made into ambulances and radio trucks too, as well as famously tugging Rapier missiles during the 80’s. Since being sold off from the MOD dozens of these Unimog-like machines have been seen in many roles, from forrestry trucks due to there amazing ground clearance and heavy duty Salisbury axles front and back, and In recovery duties thanks to there heavy duty winch and perfect rear chassis for adding a crane or any other piece of heavy equipment. 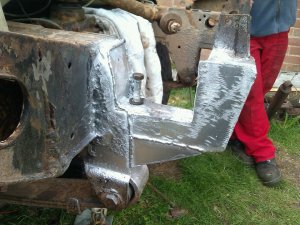 68 FL 34 entered the factory on 19/05/1976 and was delivered to the Army at Hilton on 01/07/1976. It’s being converted with a 200Tdi and LT77 5 speed gearbox from a discovery. Winch bumper from Able Engineering (midlands) Ltd, fitted with winchmax 19,000lb winch. The whole vehicle is to bepainted in bright orange (almost Fordson Orange), with TD5 era defender interior trimmings and discovery power steering.

Got a question or wanna discuss something? Email us.